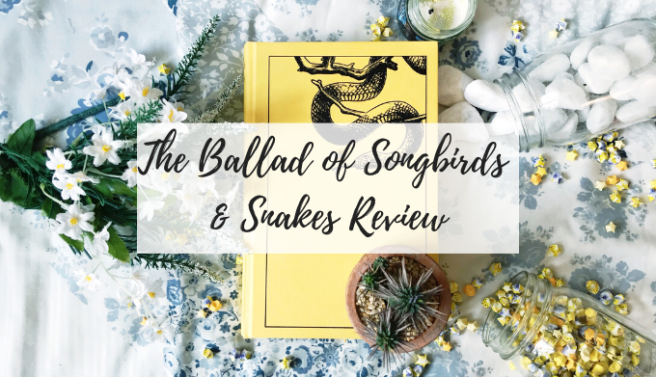 Like so many people who read The Hunger Games when they were younger, I was insanely excited for the release of the prequel, The Ballad of Songbirds and Snakes, last month.  I picked it up straight away because I couldn’t wait to return to this world and also didn’t want to hear any spoilers or anything really about this book that might sway my opinion.  I went into this book knowing very little about it, and came out of it with my love for The Hunger Games fully reignited.

At its core this book seems to be an exploration of the question whether people are born evil or become evil.

Snow is not an inherently evil person as can be seen by his care for his family and friends, and disgust at some of the Capitol’s actions, with it being the society he lives in that forces his crueler traits to become dominant.  However, he is not painted as a good guy either, but rather as a charming young boy who knows how to please people to get what he wants.  He has several redeeming qualities, particularly at the start of this book, but due to the environment he is in, as well as some of his core values he becomes the villain we know from the original books.

By learning of the hardships Snow has endured at such a young age, we learn where his hatred of the districts and hardened nature come from, explaining some of his actions whilst not excusing them.  This book is really the start of his journey to become President Snow, presenting the moments that in his younger years led him down this particular path as opposed to any others.  As someone who is not normally a fan of villain origin stories for their habit of creating sympathy for an unapologetically evil person, I really liked how Suzanne Collins handled this.

One thing that is very different from The Hunger Games is the pace of this book.  This is a very slow read.  It is not an action packed story but rather an exploration at the world of Panem at this point in time and of Snow before we know him.  The pace remains pretty slow for the majority of the book up until the last quarter, and so I wouldn’t go into this one expecting a similar level of action as the original trilogy.

That said, one thing I loved about this book as someone who adored The Hunger Games was the insight we got into the very beginnings of the games and to see how they evolved over time.  This book follows the tenth Hunger Games, which is also the first time the idea of mentors is introduced, and so watching the start of this aspect of the games, as well as the introduction of betting and the interviews, was super interesting.  Furthermore, we got to learn about the origins of The Hanging Tree, something which just instantly brought back the nostalgia of reading this series.

‘Well, as they said, it’s not over until the mockingjay sings.’

The one thing that I was not a fan of was the romance.  From the moment Lucy Gray and Snow met I knew that something was gonna happen between them because the story felt very set up towards that.  Due to this, their whole relationship always felt forced and contrived, and therefore pretty unbelievable as it didn’t seem like these two characters would ever naturally develop such a connection.  Overall it just felt like a very convenient choice to place them together.

So all in all, I would definitely say I enjoyed this book, even if it was very different to what I was expecting.  Getting to explore Snow’s character in his youth was super interesting to me and that accompanied by the look at the early days of The Hunger Games made up for the slow pace for me.  I really liked how Suzanne Collins handled this villain origin story, and I’m glad I got the chance to return to this world that will always mean so much to me.

Have you read this book – what did you think?  Do you agree with my thoughts?

3 thoughts on “The Ballad of Songbirds & Snakes”