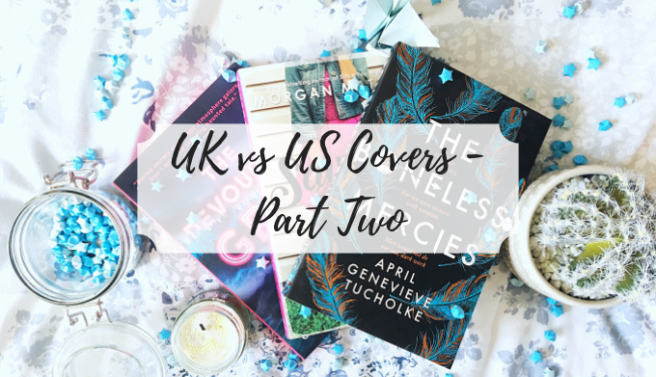 Today I am going to be doing part two of a post that I first did over a year ago, and that is comparing US and UK book covers!  I have seen so many other people do these sort of posts over the years, in particular Hailey in Bookland who first gave me the idea to it myself.

As someone who lives in the UK, I often find myself seeing different book covers in the shops to the ones that I see online or in other people posts and pictures, which can either be a good thing or a bad thing depending on which cover I prefer.  Therefore, I feel like naturally compare UK and US covers without even realising it, as I sometimes even specifically try and buy whichever version I prefer.

So here is here me pitting UK and US covers against each other for the second time!

This one is such an easy choice for me, as I am hundred percent prefer the US cover for this one for a multitude of different reasons.  I don’t think the UK cover conveys anything specific about the story other than the fact that it is a cutesy contemporary novel, and so I definitely wouldn’t have picked it up had I not already known I enjoyed Morgan Matson books or that the plot was something that sounded pretty fun.

The US cover does a much better job at presenting you with a story about a wedding in which quite a few things go wrong and even hints at particularly aspects such as Waffles the dog.  The white title stands out so much more against the dark background, and overall I just think it is a much better cover design that is both more aesthetically appealing and gives the reader a better idea of what to expect from the story.

These two covers are pretty similar at first glance, with both going with a dark blue colour scheme and having the text as pretty central.  However, where the US designs gives me much more fantastical vibes and suggests to me a different world setting, the UK one fits much more closely to the actual story in that it is clear it still takes place in our world, be it with a little hint of magic and mystery mixed in.

On a personal note, I also just prefer the way the neon pink text stands out from the dark mist and forest in the background and contrasts with the rest of the cover.  It reminds of small American town settings and secrets hidden within them, both of which are hugely present in this creepy, supernatural read.

Unlike some of the others I’ve talked about, these two covers are very different in everything from their choice of colour schemes to the details and the styles of them.  Which is probably why I find it so hard to decide between them!

In favour of the US cover, I adore all of the details they put into it that I didn’t spot when I first saw it, such as the grim reaper shadow and the skull in the sky.  It perfectly visualises the idea that death is always in the background of this book and in the characters lives as they live their last day, still trying to ignore the inevitable.  I also much prefer the dark blue and white colour scheme to the bright orange and blue of the UK cover.

That said, I am always a fan of simplistic covers, and so I do really like the illustrated hourglass that takes up most of the cover, as well as the more prominent title that seems to slide through the hourglass like the sand.  However, all in all I think I’m gonna have to give it to the US simply for the attention to detail.

This is another one that isn’t as black and white for me in that I do actually like both of the covers and so don’t immediately have an overwhelming preference for one or the other.  On one hand, I once again really like the way the US cover depicts the mercies silhouettes at the bottom, and hints to the journey that they go on across their world.  However, UK cover appeals much more to me aesthetically with the detailed feather illustrations that stand out really well against the black background.

As for the title designs, I definitely prefer the UK cover again for that, as it is just so much more interesting with the arrow through the words and the faded look to them.  I don’t hate the style of the words on the US cover, but they just don’t stand out to me as much, especially with the ‘the’ being so small and blending into the wolf outline.

So in general, I have to give it to the UK for simply being a little more eye-catching to me whilst also still conveying the idea that this is a fantasy novel, if a little more subtly.

Do you agree with my opinions?  Have you read any of these – what did you think?

2 thoughts on “UK Vs US Covers Part Two”