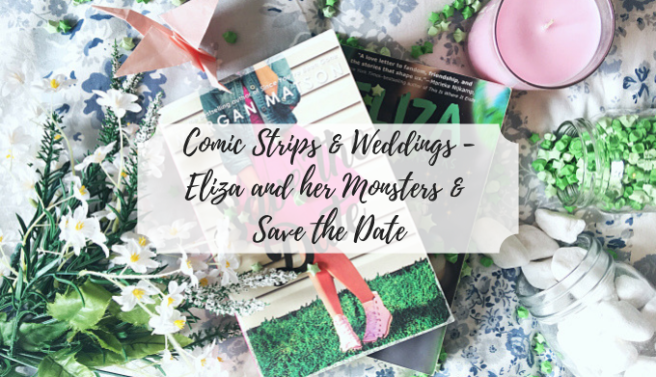 I am finally getting back into reviewing books rather than just briefly talking about them in my wraps up or in other posts, I am so happy about it.  I’m really hoping that this continues even as I get busier and possibly don’t read as much as I have this month, as I am loving being able to talk about some of the books I’ve read in so much more detail than I otherwise would.  This week I decided to review two quite different contemporaries that I read this month, both of which I enjoyed, but didn’t love for one reason or another.

So here are my reviews for Save the Date and Eliza & Her Monsters!

Anxiety and Depression representation was so well done!

This is probably now one of my favourite books that deals with mental health, as its dealt with the topic in such a real and raw way that just made me feel so understood.  Eliza’s journey was one that I could see so many different aspects of reflected in my own, as it didn’t shy away from the darker or more taboo ways in which mental health can affect your life.

This book is almost like a love letter to internet fandoms and friendships, but without skipping over the negatives.

As this book focuses on Eliza, who writes a hugely famous wed-comic called Monstrous Sea, internet culture is hugely prominent in this story, and reflects so many different aspects of it so well.  I loved how Eliza’s friends were all online as well as some of Wallace’s, and how this was shown in a positive light as people of different ages coming together over something they are passionate about.  Both of their art and writing was also so enjoyable to see scattered throughout this book, and its safe to say that I am now in desperate need of more Monstrous Sea!

On the other hand, this book also didn’t shy away from the more negative aspects of the internet and fandom culture, as we see the problems that come with fans and the constant expectation to give them what they want even if that is not in the creator’s best interest.  It demonstrated the consequences of fans feeling as though this person whose work they love owes them more and more until they have nothing left to give.

This book was super easy to get into, but also didn’t wow me enough with the plot for me to give it five stars.  I was instantly hooked and so often found myself reading at a much faster rate than I usually would, with Eliza and Wallace two characters who I wanted to know more about and see where they’re story went next.  I don’t know what else I wanted from this book, but all I know is that there was just that little spark missing for me.

Expect absolutely everything that could go wrong, to go wrong!

The synopsis for this book immediately sets you up to expect a chaotic weekend centred around a wedding, but I was still not prepared for just how much was going to go wrong – it felt like someone took absolutely every possible problem that could occur when planning a wedding and put it into this book!  And whilst that did make for a funny and eventful story, it also made the whole thing seem just a little too unrealistic and a little too over the top.  The plot focuses on these mishaps for so much of the books that it didn’t take long for me to get pretty bored of just following along Charlie and Bill trying to fix one thing after another.

This then didn’t help the pacing – it was way off for me.

Absolutely every resolution seemed to happen in the last 50 pages or so, which didn’t leave much room for these to set in or be explored much at all, and also meant that some issues were solved a little too quickly simply because there weren’t enough pages left to spend longer on them.  The story spent alot of time building up the relationships between the characters and sowing the seeds for the cracks that would later break that the fallout of these cracks felt rushed.

However, this pacing did have some benefits, as it allowed for us to really get to know all of the siblings and dynamics within the Grant family, all of whom I grew to love by the end of the book.  Each one of them are their own person who we soon get to see as far from perfect, but who join together to support each other and care for each other despite their differences.

That said, this book also dictates the realisation that these ideals aren’t perfect so well!

At the start, Charlie is presented as one of the most idealist and probably naive characters I’ve read about.  She places her family, her crush and many other aspects of her life on a pedestal, and doesn’t see the flaws in them even when they are right in front of her.  Her growth throughout the story as she learns that not everything is perfect and that there is nothing wrong with change was therefore so good to see, as we get to see her mature in front of our eyes.

Have you read either of these books – what did you think?  Do you agree with my thoughts?