This weeks topic is one I was super excited about, as I am most definitely someone who judges books by their covers, and so often has a fair few opinions on them when they are re-designed.  That said, I only managed to include six books in this list unfortunately, as this are the ones that I have fairly strong opinions on, and so were the most either pleased or annoyed when the re-designs were released.  As someone from the UK as well, I also tend to see different covers to the US anyway, and so alot of the cover changes I see are in relation to that rather than a complete re-design of the cover.

So here are some book cover re-designs that I love, and some that I hate!

An Ember in the Ashes by Sabaa Tahir

Whilst I did quite like the original covers of these ones, which are actually still the ones printed in the UK I believe, I am in love with the re-designed covers which now feature our main characters on a simple background.  I love how they still managed to incorporate the colour schemes for each book into the new ones, but also placed a POC model on the cover whilst demonstrating the badass-ness of all of our main three protagonists.

I haven’t actually read this one yet, but I am so much more likely to do so after this cover redesign!  I love the new illustrated style with the characters on the cover, as well as the muted down pink colour that still sticks to the original colour scheme, and honestly I can not explain how excited I am that they decided to redo this one.

I feel like this is such a classic answer for this, as the original were just so bad, and I never think I would have dived into this series had they not re-designed the covers.  The simplicity of the new covers works so much better for me, and makes them so much more appealing, and I love the focus on the title over the focus on the people.

Forest of a Thousand Lanterns by Julie C. Dao

I loved both this book and its cover, and so I really don’t understand why they decided to change it to this much simpler, font based one.  The original cover just complete coveys the nature of this story being an evil queen re-imagining to me, and the slow descend of Xifeng into evil, whereas the re-design is so much less intriguing and honestly pretty boring.

Although I’m not sure I’d say I hate the new covers for the Grisha trilogy, I definitely prefer the original ones with the gorgeous typography and swirling lines.  I love how subtle and almost hidden the different amplifiers are on the original covers as opposed to their very obvious nature on the new ones, and so overall I just would have preferred them to stick to the old ones in this instance. 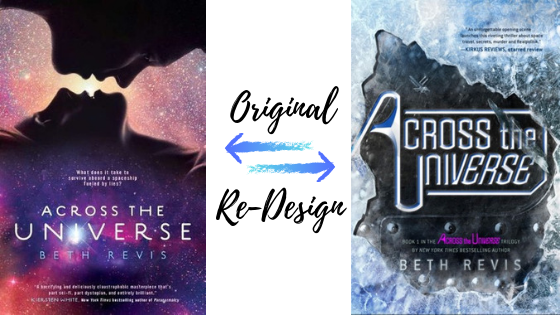 Across the Universe by Beth Revis

I have long since unhauled this book, but I don’t think I ever would have even owned it in the first place had I not picked up the original cover.  I think the new cover fits this story so much less than the original as it doesn’t showcase the romance at all, and draws away from the fact that it is in space, and overall the original is just so much prettier!

What cover re-designs did you love?  Which did you hate?  Do you agree with my opinions?