After seeing and adoring these recommendation-type posts for so long now, I was finally inspired to give it a go for myself and take some of my favourite books and recommend others, more underrated books based on them.  I am someone who is always looking for similar books to some of favourites, and so I figured it was definitely about time to give the recommending a go for myself.  I’ve also tried to include a selection of different genres instead of recommending purely contemporary or fantasy, so hopefully even if you aren’t a fan of a particular genre, there will still be something to your fancy.

So here are four of my If You Like This… Try This recommendations! 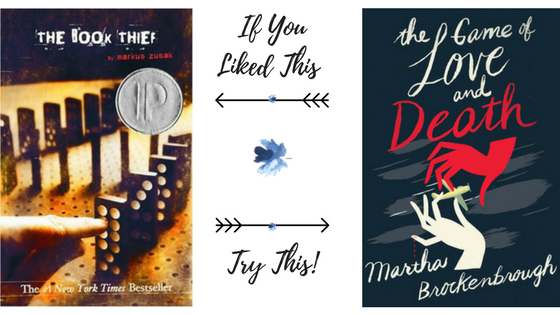 They are both set in the 1930’s: Whilst The Book Thief is set in Germany during the rise of the Nazi’s and eventual outbreak of WW2, The Game of Love and Death is instead set in 1930’s America.

They deal with issues within society at these times: One of the things I personally most adored about The Book Thief was its exploration of what life was like in Germany during this time period.  We got to see the dominance of Nazism, the persecution of the Jews and so many other issues discussed through the story of a German girl.  Similarly, The Game of Love and Death explores many big societal issues, including racism, poverty and homophobia.

They both present death as some kind of physical being: If you enjoyed seeing Death as the narrator, then why not try reading a book where Death is actually a key character.

They are both written beautifully: I’m sure everyone who has read this book fell completely in love with Markus Zusak’s gorgeous writing, as I did, and The Game of Love and Death is exactly the same, with amazing writing that will just draw you in from the very start.

Both are set in unique fantasy worlds:  I really enjoyed the Russian-inspired fantasy world that this book, and all of the other Grisha novels, take place within, especially because it is so different to many other fantasy settings.  So if you were also a fan of this unique setting and world, then why not try The Wrath and the Dawn, that similarly includes a very unique setting that is so enjoyable to read about.

Both deal with the struggle of knowing that you are going to die: If you were someone who adored the concept and idea behind They Both Die At The End, then your probably also going to be intrigued by the incoming asteriod that leaves our characters with only two months left to live in We All Looked Up.

Both follow multiple POV’s: Both of these amazing books are told in alternating chapters, with They Both Die At The End mostly switching between Mateo and Rufus, whilst We All Looked Up instead alternates between four different POV’s.

Both are set in a contemporary setting just slightly different from our own:  Despite the addition of Death Cast and all other related companies and things created because of it, They Both Die At The End does take place in a contemporary setting.  Similarly, We All Looked Up is set in a world entirely like our own, with the one exception being all that occurs due to the impending asteriod on a collision course with earth.

Both are heartbreaking but thought-provoking reads: If you cried at the end of They Both Die At The End (who didn’t?!) then you’ll most likely be sobbing at the end of We All Looked Up as well.  Just warning you…

Both are set over a short amount of time: If, like me, you are huge fan of books that take place over the span of day or so, like in The Sun is also a Star, then why not try a book that instead takes place over a single week, as You Know Me Well follows our two main characters over the course of Pride Week.

Both include great diversity: Diversity is something I adore seeing in books, and so both of these made me really happy with the amazing diversity they included within them, with The Sun is also a Star including amazing racial diversity, and You Know Me Well following two LGBT+ narrators.

Both are incredibly addictive reads: Both of these books are such quick yet spectacular reads that you will completely fly straight through.

Have you read any of these books – what did you think?  Do you agree with my recommendations?  Are they are any books you would recommend for fans of another book?